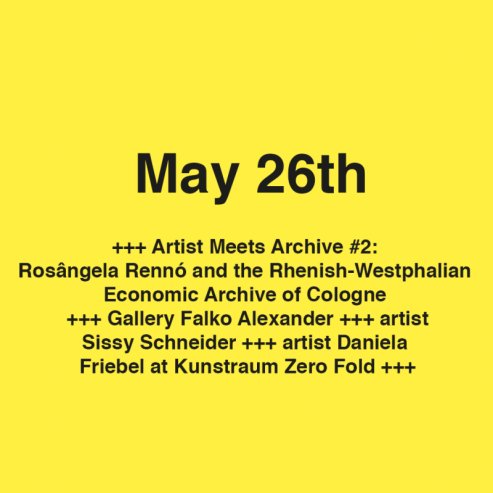 Artist Meets Archive artist Rosângela Rennó introduces herself and her work. In the film that she sent us from Rio de Janeiro, where she lives and works, they describe their involvement with photography and archives. She also gives us a small insight into her research work, which she is doing for our residency project at the Rheinisch-Westfälisches Wirtschaftsarchiv.

The RWWA is a rescue station for historically important documents of the economy from the Rhineland. In addition to files, all kinds of photographs, glass negatives, slides etc. are archived. Photographs represent an important part of the RWWA's 600 or so holdings. Photographs and glass negatives of factory halls and workshops, machines and technical equipment - some of them of gigantic dimensions - bear witness to the practice of economic life from the Industrial Revolution to the present day. Director Dr. Ulrich Soénius presents the archive.

KHM student Sissy Schneider presents her work "Chronos", which should have taken place during the Photoszene-Festival. It is about the examination of time and space in photography as well as perspective.

Daniela Friebel shows her work "Auspicia" at ZERO FOLD. In this film she introduces the different groups of motifs in her work, including the phenomenon of swarms of starlings that gather in the trees above the Roman Central Cemetery to sleep during the winter months.

In his gallery, gallery owner Falko Alexander mainly shows artists* who deal with digital image means and procedures and presents some of his gallery's works here as examples. We also get to know Michael Reisch, who works at the interface of photography and digital imaging processes, for example 3D printing or augmented reality. Some of his works are even created completely without a camera.